The 15 Most Expensive Mountain Bike in the World

Mountain bikes are a bit different than normal bikes as they are meant for rough terrain. Multiple gears and sturdy frame are specially designed to increase the durability of the bike as well as its performance.

These machines are no doubt most expensive mountain bikes, but their additional features prove a blessing if you are riding on uneven platform.

Some mountain bikes have staggering price tags. These are pro-race level and high-end bikes for professional usage. The cost of these bikes goes up because of several reasons. The topmost is that they are absolutely the best, and in most cases, are customized to suit individual preference and needs.

Thousands of hours of research are spent to develop the best product to give the rider some additional advantage, and this results in astronomical price tags.

The best equipment will demand money as its compensation. If the price is for features and specifications, then it can be considered worthwhile, but sometimes it is seen that several brands have added precious metals and stones on the mountain bike to make them more valuable.

Whatever the reason most expensive mountain bike will always command respect from its audience. 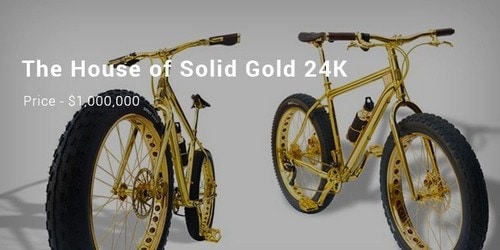 House of Solid Gold 24k Gold Extreme Mountain Bike is one of the most expensive mountain bikes from The House of Solid Gold at an astronomical amount of 500,000 US dollars. It is a limited edition series with the production being stopped by manufacturers at number thirteen.

House of Solid Gold 24k Gold Extreme Mountain Bike is made from pure 24k gold and is available along with a gold-plated water bottle for water and an alligator skin saddle.

All the most expensive mountain bikes are coated in electroplating procedure, and it took them seven hundred and fifty hours individually to finish every single bike to perfection.

A logo bearing “THSG” is integrated on the bicycle, and the custom image is adorned with five hundred golden sapphires and six hundred black diamonds. This most expensive mountain bike is customized to suit the needs of its specific customer. 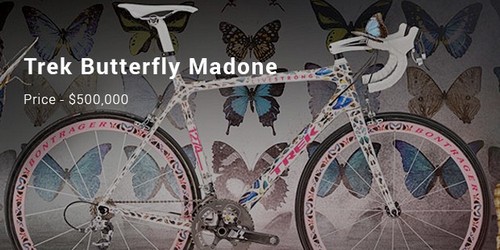 It was Armstrong himself who tweeted that the most expensive mountain bike had been sold for half a million dollars.

Butterfly Trek Madone is an exceptional mountain bike with an extraordinary design by designer Damien Hirst. He made it especially for Lance Armstrong to celebrate the fact that he had survived cancer and was returning to the cycling tour once again.

This most expensive mountain bike was created to give a high-end performance in the cycling circuit. Real wings of butterfly were placed on the rim and concrete frame of the bicycle to give it a unique look. 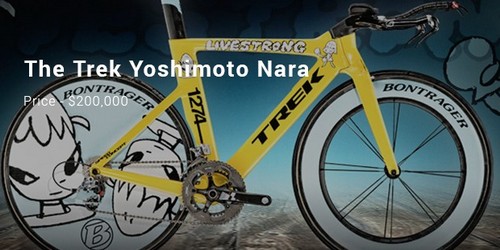 Japanese artist Yoshimoto Nara and world-renowned brand Trek have decided to collaborate for a mountain bike that has the best possible design will give an amazing performance and whose speed and quality will be unmatched.

The most expensive mountain bike at 200,000 US dollars is a speedster and works like magic. It was created to honor Lance Armstrong’s triumph over the ill-fated disease cancer. The triumphant cyclist rode this carbon-fiber mountain bike during Tour de France.

Trek Yoshimoto Nara was sold at Sotheby’s auction, and the proceeds were donated to charity. Images of cartoons, flying UFOs and logo are printed on this lightweight mountain bike to make it look awesome. 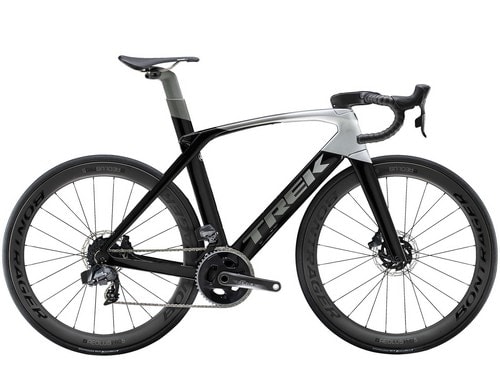 At a staggering amount of 160,000 US dollars Kaws – Trek Madone is one of the most expensive mountain bikes in the world for professional usage.  Lance Armstrong rode this mountain bike in the year 2009 at Vuelta Leon y Castilla Race.

Kaws- Trek Madone is a yellow and green colored most expensive mountain bike in the world. It was sold at a charity auction at Sotheby’s that benefitted the cancer society. There is a “chomper” teeth design on the wheel rims and frame of this special edition stunning bike. 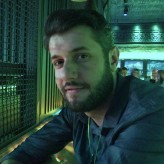 Use this form to ask us a question, book a service or book a bike fit. We will respond to you within one business day. We look forward to hearing from you.